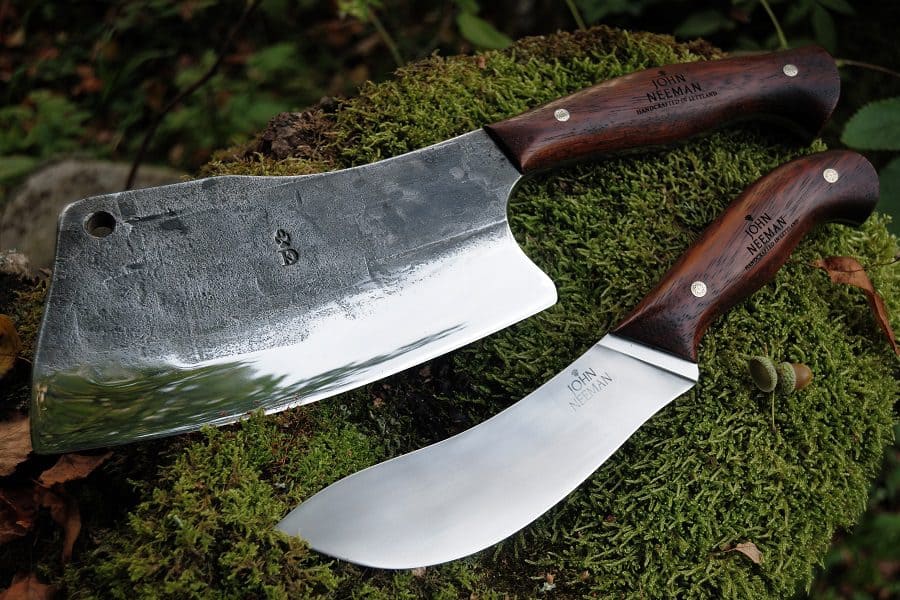 The butcher knife and cleaver are two terms that people often use interchangeably. To the untrained eye, these two knives may seem similar and have the same overall job.

While they are indeed very similar, there are a few distinct differences between the two.

So how exactly are these two knives different?

This guide will cover everything you need to know about the butcher knife vs cleaver debate. We will cover what each knife is and list some pros and cons.

Find out how the two knives compare to each other and how they differ. We will also give you some advice to help you figure out what tool is best for you.

Keep on reading to find out more about the butcher knife vs cleaver.

What Is a Butcher Knife

A butcher knife is a certain kind of knife that people primarily use to dress or butcher an animal carcass. You can also use butcher knives to strip, split and cut meat.

It Is a Versatile Tool

Many people believe that you should only save butcher knives for heavy-duty jobs. However, that is not necessarily the case. Butcher knives are extremely versatile; you can use them for just about any job in the kitchen.

For instance, you can use a butcher knife to cut up veggies, slice through baked pizza or even cut off a piece of bread.

You Have Control Over the Cut

Something that butcher knives are known for is how much control they offer. Since the blade is so sharp, chefs can glide through the meat without worrying about cutting too far.

They also do not have to work at the meat for it to give; the knife is sharp enough on its own.

The reason that this knife has so much control is that it has a long blade. The long blade allows chefs to make precise cuts, therefore allowing them to have a lot of control over the blade.

When butchers or chefs work with butcher knives, they typically use the instrument for a long period. For this reason, many butcher knives have a comfortable handle.

Most will have an ergonomic design that is easy to hold but will also have perfect balance. You should be able to use the knife for a few hours without getting muscle aches in your hand. Since the blade is so sharp, it is also normal to see a protective bolster to keep your fingers safe.

The Blade Will Not Tear or Shred Meat

One of the main characteristics of butcher knives is that they give very clean cuts. You will never see a butcher knife tearing or shredding through meat.

This feature can typically be attributed to Granton edges. Granton edges refer to a series of oval-shaped indents that run along the edge of the blade. These indents allow small air pockets to form, reducing overall drag and friction while cutting. The result is a smooth and clean cut.

While not all butcher knives have Granton edges, many of them do.

When it comes to high carbon stainless steel butcher knives, you will soon notice that the blade has low stain resistance. It will take a while for the blade to discolor, but it eventually will if you use it for various foods. The blade can eventually turn black, but this won’t affect how well it cuts.

Another thing to keep in mind is that high-carbon knives are prone to rust. You will have to store it properly to prevent corrosion. These blades will require more maintenance to stay nice and sharp. You will have to clean them regularly with a stainless steel scouring pad.

What Is a Cleaver

A cleaver is a type of knife that has a large, flat rectangular blade. Both chefs and butchers use this tool to tackle large pieces of meat and to split bone. You can also use this knife to crush foods like garlic.

Many people use the cleaver for heavier food items like meat with dense bone and cartilage. You can also use the blade to cut through things like pineapple and squash.

Now that we know what each knife is let’s look at a few similarities and differences between the butcher knife vs cleaver.

You Can Use Both To Chop Produce

One similarity between the two knives is that you can use both to chop fruits and vegetables.

Both Are Made of Similar Metals

Another similarity between the butcher knife vs cleaver is that both are normally made from similar metals.

You Can Use Both for Heavy-Duty Cutting

When one thinks of a butcher knife vs cleaver, the same image typically pops up in everyone’s mind: a big knife cutting through a thick piece of meat.

This imagery is actually pretty accurate; you can use both knives to cut through thick meat. While the cutting styles will differ, both blades are strong enough to cut through bone and cartilage.

One of the main differences between the butcher knife vs cleaver is the blade shape.

The cleaver has the most distinct blade shape with its perfectly rectangle blade. The wide and long blade makes it one of the biggest knives you will see in the kitchen.

Butcher knives, on the other hand, look more similar to a standard knife blade. It has a long blade with a slight curve at the very end. Most butcher knives will also have Granton edges.

When it comes to the butcher knife vs cleaver, another difference is the cutting method. When chefs use a butcher knife, they practice a lot of careful control. The blade does not go further than they intend; it simply glides through the meat as the chef relies on the sharp blade to do the work.

A cleaver has a much different process. This knife does not rely on the sharpness of the blade but on momentum. The user does most of the work by placing the cleaver on the food and using their other hand to push the blade down.

A lot of confusion that surrounds the butcher knife vs cleaver revolves around the names. For instance, a cleaver can technically be called a butcher’s knife. That is because the term “butcher knife” can be generic and refer to the tools that a butcher uses.

However, you can’t always call a butcher knife a cleaver since the term may refer to the traditional style of knife called the butcher knife, which we discussed today.

Which One Is Better for Me

We now know the main differences between the butcher knife vs cleaver. So which one is better for you?

Let’s start with the butcher knife. This knife is a very versatile knife that has an extremely sharp blade. While you can use it in the kitchen to cut through thick meats and produce, you can also use it as an outdoor utility knife. Many outdoorsmen use the butcher knife for skinning and butchering carcasses.

On the other hand, the cleaver stays in the kitchen. This knife has a more blunt edge and works on momentum instead of sharpness. You can use this tool for many different jobs in the kitchen, such as cutting through tendons and bone, chopping up vegetables or dicing, slicing, and mincing other food items.

Overall, you can use both knives for many different things. If you want a hunting or camping utility knife that is more geared towards versatility outdoors, go with a butcher knife.

On the other hand, pick up a cleaver knife if you want a versatile tool strictly for the kitchen. While this knife is designed to cut through heavy meat, you can use it for a dozen other small jobs.

We hope that this guide has helped clear up the difference between a butcher knife vs cleaver.

A butcher knife refers to a knife with a long, curved blade and sharp edge. People use these knives to butcher or dress animal carcasses and strip, split, or cut meat. This knife is very versatile and can even be used as a utility knife for hunting and camping.

A cleaver is a knife with a wide rectangular blade and blunt edge. This knife works well for cutting through thick meat with bone and cartilage. However, you can also use it on produce and for slicing, dicing, and mincing.

There are a few similarities between the two. You can use both to chop fruits and vegetables and for heavy-duty cutting. Both are also made of carbon and/or stainless steel.

Some main differences include the blade shape, cutting method, and how you can use the name of each knife.