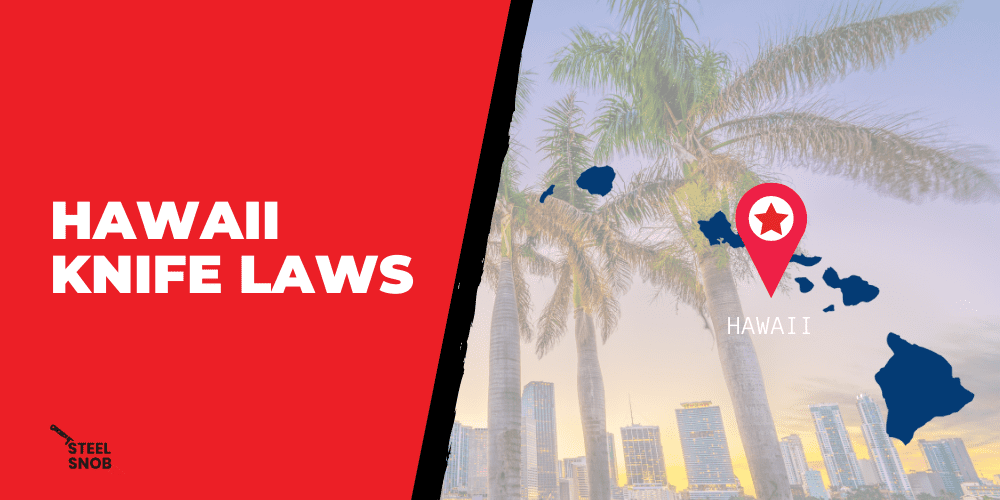 Introduction: What are the Laws in Hawaii Regarding Possession of Knives?

Hawaii knife laws are straight forward and unambiguous. In Hawaii, the laws on possession of knives fall under Chapter 703 of the Hawaii Revised Statutes.

Under Section 712-1201, “No person shall have or carry a dirk knife, a throwing star, a bolo knife, a stiletto, a ballistic knife, or any other instrument which can be used as an offensive weapon” without justification.

In Section 712-1202, “No person shall sell or offer for sale within the State of Hawai’i any dirk knife,…any throwing star,…any stiletto…or any other instrument which may be used as an offensive weapon” without justification.

The laws for knife possession in Hawaii are surprisingly lenient.

Hawaii is the only state in the United States where it is legal for people over 16 years old to carry knives with blades up to 20 inches long, openly or concealed. The only caveat is that it is illegal to carry any sharp object on school grounds.

The laws in Hawaii about possessing knives are as follows:

-Hawaii state law prohibits the possession of any “dangerous weapon” with exceptions for those who have the permission of the person in whose dwelling, business premises, or vehicle such weapon is possessed.

-The term dangerous weapons includes any dagger, dirk, pistol, revolver or other firearm (except each firearm must be unloaded and kept from improper hands), billy club, sword cane or other cane or spade shaped weapon with a blade over three and one half (3 1/2) inches in length and/or a butterfly knife not under six (6) inches.

-It is illegal to carry any dangerous weapon onto school property including everything on school grounds.

Penalties for Carrying a Knife Without Proper Permits in Hawaii

The people of Hawaii are well aware that the penalties for carrying knives are quite severe, but what happens when someone is caught with a knife without the proper permits?

Hawaii has taken steps to ensure both residents and visitors are kept safe. If you are caught carrying a knife in certain places, you could face up to 30 days in jail, fines of up to $2,000, or both. If you use the knife to cause bodily injury or death, the penalties can be even more severe.

For example, carrying a concealed weapon is illegal if it falls under any of these four categories:

The best way to avoid getting into trouble with this law is by reading the Hawaii Knife Laws carefully and understanding them.

The law states that you can only carry a knife if it is secured inside a sheath or if it is a pocketknife with a blade that does not exceed four inches in length.