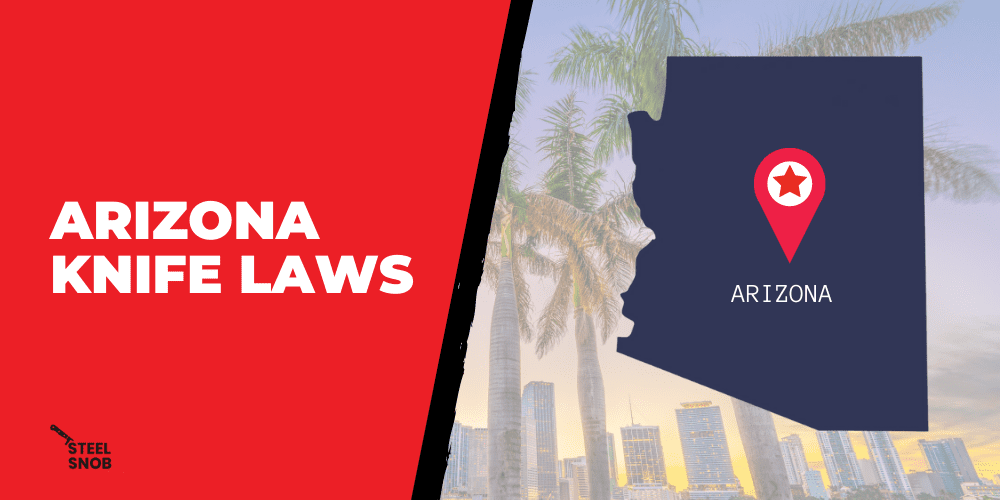 Knife laws that apply to Arizona are state-specific. It is important to know what they are before carrying a knife in Arizona.

Arizona law prohibits anyone from possessing knives with blade lengths greater than 3.5 inches unless they are in their home or place of business, carrying them to protect themselves, or using them for hunting game. The possession of these weapons is not permitted when in public places or on school grounds, but it is legal to carry them when there is no intent to use them as weapons. Any blade longer than 3 inches will be considered a dangerous weapon and has to be concealed or sheathed when not being used for cooking or other household tasks. However, there are exceptions to this rule for hunting knives, pocket knives and multi-tools under 6 inches.

Furthermore, you can carry knives openly or concealed without violating the law, but if anyone feels threatened by your presence and asks you to leave their property you should do so (unless there is no reasonable way for you to exit).

What are the Arizona State Laws Regarding Possession of Knives?

Arizona is one of the few states that allow anyone to carry a knife, as long as it is not considered a deadly weapon under state law. Arizona Revised Statute 13-3102 defines weapons or deadly weapons as “a dirk, dagger, ice pick, or other “type” of stabbing instrument; dynamite; nitroglycerin; any explosive bomb; missile launcher; tear gas gun; taser.” As you can see from this list, there are plenty of knives that would be allowed if they were legal in Arizona.

Arizona state laws pertaining to knives are not as restrictive as some states. This means that the law enforcement officers need not arrest someone for carrying a knife unless they believe that person is doing so unlawfully.

The Arizona State Legislature enacted this law in 2010, which basically says that it’s illegal to knowingly carry any dangerous weapon without just cause, but does not specify knives.

It is also legal for an individual to have a knife in their possession when the blade of the knife is less than 3 inches from one end of the handle to the other end of the handle provided that it is not concealed from view within an instrument case, sheath, or scabbard.

In Arizona, it is illegal to carry a knife of any length in a concealed manner.

Arizona has very strict knife laws, both in terms of carrying knives and possessing them. It is illegal to carry a knife in Arizona without any valid reason for having it there. If you have a valid reason for carrying a knife, you are limited to carrying it no more than 4 inches long with the blade being under 2 ½ inches long. It is also illegal to possess certain types of knives in Arizona, such as Bowie knives, automatic knives, or switchblades.