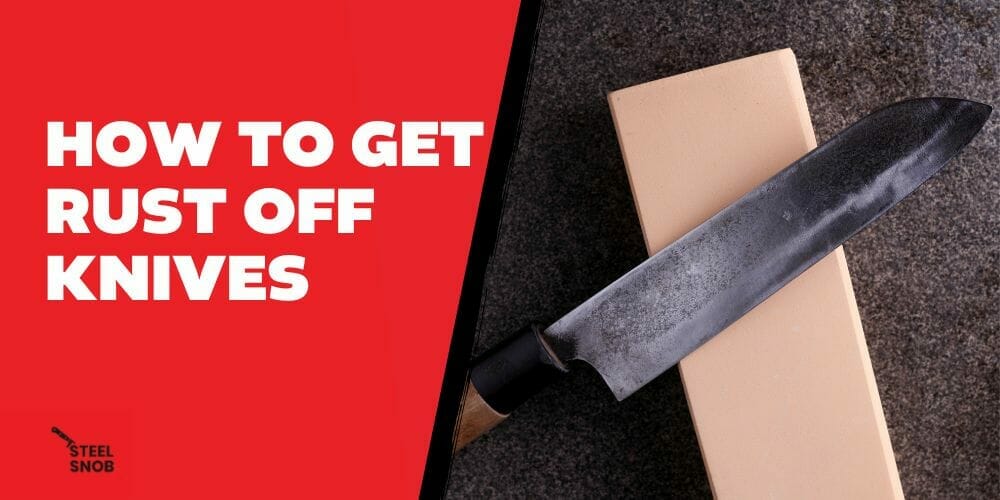 Since cooking utensils are essential in the kitchen, their maintenance should be a top priority. The more often you use them, the more prone they are to wear and tear. Rusting is a common phenomenon that occurs as we use our kitchen knives over time. The sight of rust is unpleasant, and it shouldn’t come in contact with our food.

Most people don’t know how to get rust off knives, so they throw them away, only to get met with the same situation with a new blade. In this article, we will discuss simple but effective ways to remove rust stains from your knives (some might shock you). Also, we will talk about what causes kitchen knives to rust, as well as how to maintain them to avoid this problem.

What Causes Knives to Rust

Rust is a term used to define a chemical process where oxygen and iron react in the presence of air and moisture. Rust is an iron oxide that appears in a reddish-brown stain.

Knives rust because of two elements — air and moisture. When the knife blade comes in contact with oxygen (air) and moisture (water), a chemical reaction occurs, leading to rusting. Knife blades are commonly made from iron alloys (and other elements) as opposed to pure iron. Stainless steel is an example of an iron alloy. They are less susceptible to rust due to the materials used in making them, and it’s only possible if you maintain them.

How to Maintain Knives Against Rust

Washing your knives with your hands is advisable, rather than placing them in the dishwasher where they can be exposed to water. Excessive exposure to water is what causes knives to rust. Also, when you wash utensils, you should immediately dry them to remove the moisture.

2. Wash Immediately After Use

Carbon steel is an iron alloy used in making knife blades. They are more susceptible to rust, and after you use them on acidic food while cooking, it will cause a reaction that will produce rust. Rub oil on the entire blade to serve as a protective coating.

Store your knives where the blades won’t be exposed to moisture or air.

How to Get Rust off Knives

There are various ways you can get rust off knives, whether natural or chemical. Be careful not to use a tough, abrasive sponge when scrubbing the steel blades. They include:

Sodium bicarbonate (baking soda) is one of the key ingredients in removing rust from knives. One of the reasons why baking soda works is because it acts as an abrasive, which means it can effectively rub against the surface to eliminate rust. Baking soda with white vinegar will be more effective for tougher rust stains.

White vinegar is made up of acetic acid, which allows it to break up the rust on your knives and dissolve it. Fill a bowl with water and white vinegar, and soak your blades. The time you soak the knives depends on how bad the rusting is.

Ideally, you want to soak it overnight or for two-three days. After soaking the blades, use a brush to scrub the rusted knives. You can also use white vinegar and salt in a paste to eliminate the rust spots. The salt will serve as an abrasive to get rid of the rust.

Potatoes are an underrated ingredient for removing rust from knives. It might be hard to believe at first, but the potato is equally as effective as previous methods on the list for dealing with rusty knives. Potatoes work because they contain oxalic acids, allowing them to break down the rust.

Get a potato and slice it in half. In a small bowl, make a paste of baking soda, salt, and dishwasher. The reason why salt works as an abrasive is that it’s tough on rust, but not enough to scratch the surface of your knife. Please make sure the paste is thick, then pour it on one half of the potato. Use the potato to scrub the rust off the blade. Repeat the process with the other half of the potato.

It’s common knowledge that lemon can also serve as a cleaning agent, extending to removing rust from your knives. The acidity of lemon can effectively dissolve the rust on your blades. Using lemon with salt is guaranteed to restore your knives.

Sprinkle a good amount of salt on the knife, squeeze lemon juice onto the surface, then scrub with a soft cloth. Please don’t leave the lemon on the blade for too long because its acidity can damage the surface. 10-15 minutes is enough time for it to do its job.

There are many brands of rust removal chemicals you can use to get rid of rust from your knives. Be careful when buying a rust removal solution. Make sure the ingredients are not harmful and would not damage your blade. Research to ensure the chemical doesn’t pose a danger of any kind. Use the solution according to instructions from the manufacturer.

Onions have sulphonic acid, created when the enzymes found in onions are broken down to sulphoxides when exposed to open air. By simply placing your knife between an onion, you can get rid of rust. The reaction of the acids in onions with the rust causes it to break down.

If none of these methods help restore your rusty blades, you will have to throw them away.

Is it good to cook with rusty knives?

Cooking with rusty knives is dangerous and can be harmful to your health. Rust should not come in contact with your food because its components are unsafe for consumption. Also, when cooking with rusty knife blades, you can accidentally cut yourself. If not treated properly, you can have tetanus when the bacteria (clostridium tetani) that cause it comes in contact with your open wound.

Rust doesn’t play a major role in the bluntness of your stainless steel knives. Over time your knife will get blunt due to constant use, whether or not it’s rusty.

Chromium is a major component of stainless steel. It acts as a protective layer to the steel when it comes in contact with oxygen from water or air. The chromium creates a layer of protection on the steel, which is called ‘chromium oxide.’ According to a US Geological Survey publication, most stainless steel contains about 18% of chromium which increases its corrosion resistance. The higher the amount of chromium, the more protected the stainless steel will be from rust.

The second factor to consider is the maintenance of the steel. If your knife is made of stainless steel, you need to maintain it, or its corrosion resistance won’t be as strong. The last factor determining if stainless steel will rust is the surrounding in which you use them. Examples are exposure to high temperatures, harmful chemicals, moisture, a salty environment, etc.

These two types of steel are beneficial. Choosing which type depends on what you hope to get from them because they both have pros and cons. Stainless steel is more resistant to rust because of chromium, while carbon steel has a higher amount of carbon and low chromium, which makes it susceptible to rust.

Carbon steel lasts longer and is stronger because of its high presence of carbon. However, it is more brittle than stainless steel.

Once you notice your knives rusting, you should take immediate action to get rid of them before it becomes out of hand. Knowing how to get rust off knives is an important step in tackling the problem. These methods can also be useful for other kitchen utensils.