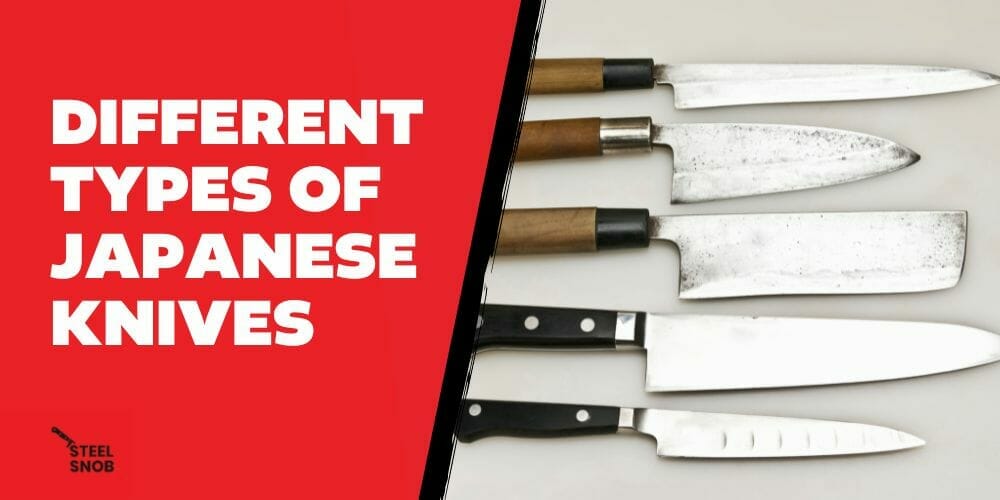 Japanese knives are well-known around the world for their outstanding workmanship and razor-sharpness. They also have distinct features and a separate knife-making philosophy.

There are many reasons why Japanese people are so fussy about their kitchen knives. One of the most important is that well-made Japanese kitchen knives offer many benefits.

Even top-tier international chefs use Japanese knives in their regular meals. Let us take a deeper look at some of the lesser-known secrets and benefits of utilizing Japanese kitchen knives.

The Origins of Japanese Knives

Kitchen knives have been used in Japan since the late Kamakura era (1185-1333). During this period, good quality water, charcoal, and soil were discovered in Seki, Gifu Prefecture. People employed these ingredients to manufacture fine Japanese katana (swords).

Seki is “the cutlery town,” producing the greatest kitchen knives. Seki is renowned as one of the “three S towns of cutlery.” Many types of Japanese knives, derived from the Japanese katana, stem from generational traditions.

The Distinguishing Characteristics of Japanese Knives

Japanese kitchen knives are top-tier for their sharpness. Many knife makers in Seki City produce razor-sharp blades for international knife manufacturers. This demonstrates their appreciation for the high level of Japanese competence.

When washing a sharp Japanese kitchen knife, you need to act with caution. A sponge can be sliced if the blade barely touches it. That is the sharpness of Japanese kitchen knives. The more you use the knife, the faster the blade will wear down and get dull, so frequent maintenance is essential.

If you care for your knives properly, they will become some of your favorite kitchen things that you will cherish for a long time.

The Flavor of the Meal

In many places, you chop food by moving the knife away from you. In Japan, the reverse is true. You slice food by drawing the knife towards you. The dish will have a smooth texture if sliced in this manner and with the grain. But cutting against the grain will detract from the taste of the food.

It is worth noting that the sharpness of a knife can affect the flavor.

One of the advantages of a sharp knife is its ability to cut food with grain without compromising the taste. This results in an attractive cross-sectional look. For example, all Japanese foods offered at high-end Japanese restaurants are stunning to look at.

Chefs at these high-end restaurants use sharp, high-quality blades to create a smooth cross-section of the dish. Japanese food is pleasant to the mouth and the eyes.

The development of the tradition in many places is a prominent characteristic in the history of Japanese knives. Some of these regions have kept their steel craft talents up to the present day, and they are as follows.

Sakai is the largest knife manufacturer in the region. Its roots date back to the fifth century during the construction of Emperor Nintoku’s mausoleum. It was a large-scale initiative that resulted in many blacksmiths relocating to the city and settling down.

They honed their talents, especially when swords became less popular. Then they transitioned into knife manufacturing. Because of their high quality, the government once decreed that only knives from the region can harvest tobacco. The region’s reputation for making the best silverware has endured.

Because of its accessibility to key raw resources, Seki became a popular destination for blacksmiths. It was also one of the first places to combine several types of steel in different quantities to form a strong composite meal.

The blacksmith tradition of Kyushu Island was passed down from an artisan who traveled from Kyoto 700 years ago. It grew into a hub for the manufacture of agricultural implements. Its Echizen lacquer allows it to create some of the most exquisite knife handles in the world.

The area is on Kyushu Island’s southern coast. Its topography gives it a distinct culture, including a knife-making heritage. Their Japanese knives have a kurouchi technique, which leaves the finished blade unpolished for a rustic and black finish.

The grade of the steel influences the knife’s longevity and sharpness. High-quality steel creates the greatest Japanese blades. If you want the greatest Japanese knife set, it will most likely contain two types of steel. These are high carbon steel and stainless (corrosion resistant) steel. Here’s a rundown of the several varieties of steel used in the production of different types of Japanese knives.

Japanese chefs use high carbon steel. This is because their high carbon content allows them to be forged to a high hardness with an HRC value of 60+. And they remain easy to sharpen. The knives need frequent care to avoid corrosion and rust.

To improve steel’s resistance to rust and corrosion, chromium is added to form a protective layer. Stainless steel is defined as having chromium values of 12 percent or above.

Types of Japanese Knives and their Applications

Gyuto is the Japanese term for a chef’s knife. It is an all-purpose knife that can do almost everything. The Japanese chef knife is slimmer and lighter than its European counterpart.

It also features a basic design, with no blockage on the edge of the blade adjacent to the handle, allowing you to sharpen this end as well. The knife contains tougher steel and has great edge retention.

The Santoku is another multifunctional knife, as the name suggests. Santoku translates to “three virtues,” referring to its usage for cutting meat, fish, and vegetables. It has a larger blade profile than the Gyuto, but its belly is flatter, allowing you to chop up and down instead of swaying back and forth.

The sujihiki is a razor-sharp slicing knife. It serves a similar purpose as the European slicing knife, but it is thinner and harder steel provides superior edge retention. You also sharpen it at a sharper angle, which improves its accuracy. It can work for carving, fileting, and basic slicing.

Petty refers to a knife that doubles as a paring knife. The putty knife is also a utility knife. It is an ideal tool for delicate tasks that need more finesse. These include peeling fruits and vegetables, de-coring mangoes, or cutting fat and silver skin off meat.

It is the equivalent of boning, but it differs from its western counterpart. It, for example, has a rigid blade with limited flexibility. The blade is triangular with an uneven edge. Its characteristics make it ideal for slicing soft meat joints and deboning birds. It is also a utility knife.

The pankiri is a Japanese bread knife that may also cut through other baked goods. It has ridged teeth that let it cut through hard crusts and other delicate foods without breaking them.

The Nakiri is a vegetable knife with a western double-edged blade. The straight blade enables it to perform all precision vegetable cuts such as julienne and allumette. It is also great for slicing through tough-skinned agricultural vegetables. Some examples are pumpkins and squashes.

The Yanagi is a specialized traditional Japanese knife used to cut sushi, crudo, and sashimi. They are single-edged for this role, which makes them sharp. And their considerable length allows for a protracted drawing motion.

The Distinction Between Japanese and Western Knives

Western knives, for example, have a curved shape around the edge and medium to high points. This design allows for a rocking action and the application of pressure to particular areas of the blade. For cutting, Japanese knives have low tips.

Japanese knives are thinner and lighter, which allows them to be sharper and hold their edge for a longer period. It also renders them prone to chipping. Western knives are thicker and heavier, requiring more sharpening time. But they are more robust.

Japanese knives contain stronger steel, which allows them to keep an edge for longer and can be thin, allowing for a sharper edge. Western knives use softer steel, which necessitates more material. This is what makes them thicker but more sturdy.

Most Japanese knives, like their swords, usually have only one cutting edge. Several Japanese blades have twin edges in a 70/30 balance to allow for high angles.

The Japanese knife-making craft is steeped in tradition. A thorough search can assist you in locating the greatest Japanese kitchen knife among a hundred types of Japanese knives. You can also look for a decent marketplace where you can choose from a variety of knives ranging in material and style.

At Steel Snoob, we provide this as well as a wonderful purchasing experience. Come see us immediately to get the greatest Japanese kitchen knife set.