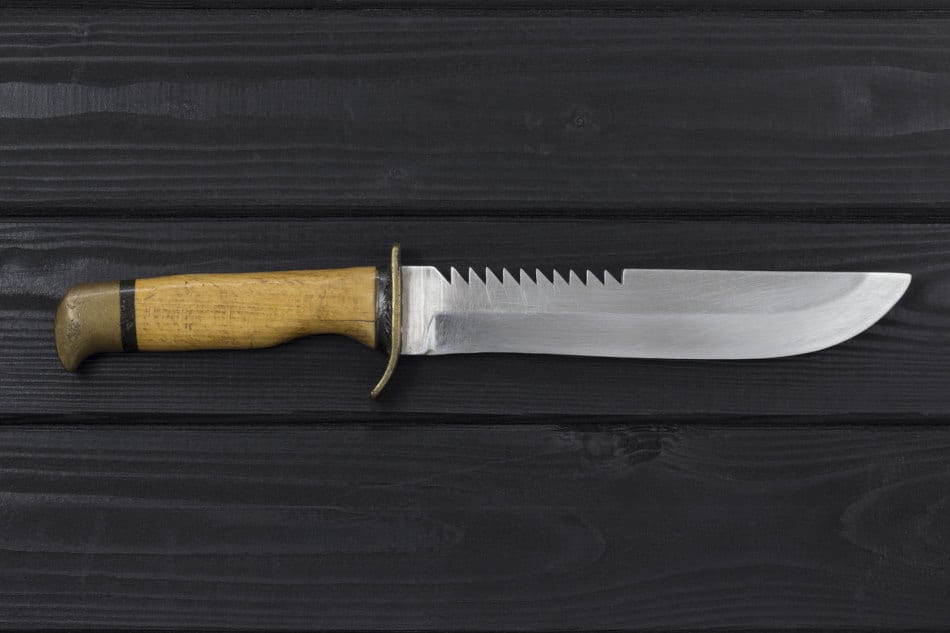 If you’ve ever seen one of the Rambo movies, you’ll notice he carries a large Vietnam-era combat knife. You’re probably wondering why one side of it looks like a mini-saw?

One edge of this knife had what’s called a serrated spine. This texture allows users to cut through different materials than the plain edge on the opposite side.

So why do combat knives have serrated edges? What are they used for?

Keep reading below if you want to learn why some knives have serrations and others don’t.

The Characteristics of Combat Knives

Combat knives are clearly different than something you’d buy to use for cooking. But, what are the characteristics of combat knives?

Also known as tactical knives, they are designed to be precise and used for self-defense. Combat knives are made of stainless steel, carbide edges, and various opening mechanisms.

Considered a “lifeline” for all scenarios, combat knives are engineered to be more rugged and dependable than other types of knives.

When shopping for combat knives, you have the option of picking out an out-the-front, OTF knife or an automatic knife with a spring device. The choice really depends on what you plan to do with it.

There are pros and cons to both types of knives.

Combat knives typically include knife serrations. One side will be a jagged-edged knife with a saw-like surface.

A serrated spine is used on most combat knives because it gives more options to the user. He or she can use both the serrated and plain edge sides. Let’s take a look at what each of these means.

Believe it or not, there’s a huge debate on whether combat knives should include both types of edges.

Serrated edges allow a user to cut through different materials. They appear as “teeth” and are effective at slicing through things like steaks or plastic water bottles.

If you’re wanting a knife for pushing or dragging, then a plain edge knife is better. These are commonly used for shaving, whittling, or chopping vegetables.

Plain edged knives are far more precise than serrated edges. A surgeon’s scalpel is essentially this type of blade. It also leaves a smoother edge on the item that was cut.

As you can see, these two edges are used very differently. Knife manufacturers will add both to a combat knife to make it resilient.

No matter where you are or what you’re doing, you’ll be able to saw or slice most items with your knife.

Are you planning to use a combat knife for self-defense? Knife experts recommend using a plain edge knife because serrations can get snagged in clothing during an altercation.

On the other hand, combat knives being used by people spending time outdoors should probably have both edges.

The Reality of Adding Serrations To a Knife

Do you have a favorite plain edge knife that you wish had a few serrations? The good news is you can add knife serrations on your own.

The first thing you want to do is get a sharpie and mark where you would like the serrations to be. Next, use a rotary tool with a diamond blade to cut the serrations into the knife.

You can also use diamond bits to better shape the serrations. The last step is smoothing out the jagged surface. If this doesn’t interest you, hire a professional to do it.

As with any knife you own, whether for the kitchen or outdoors, you want to conduct regular maintenance and keep it sharp.

You’ll want to sharpen the blade on the stone at a 22-degree angle. Run both sides across the knife 20 times. Use the medium-coarse stone to remove scratches and the fine coarse to sharpen the edge.

The lubricant or water is applied to the surface of each stone.

You can test the knife’s sharpness with a piece of paper.

Choosing the Right Knife for Your Needs

In the past, a combat knife was judged on how well it helped take down an enemy soldier or menacing animal. Things are different today. Combat knives are used for a variety of reasons.

Need some help selecting the right knife for you? Here are some combat knife design features to consider:

These are all important features to consider when browsing for a combat knife. You also want to consider what you’ll be using it for. Unless you’re in the armed forces, you may want a tactical knife for camping or yardwork.

What knife is ultimately best for you will depend on what you decide. The look and style of the knife will also differ depending on all the variables we listed above.

Make sure to do plenty of research ahead of time and ask questions.

Combat knives are a great addition to any toolset for outdoorsmen, contractors,  construction workers and those who love to spend time in the wild.