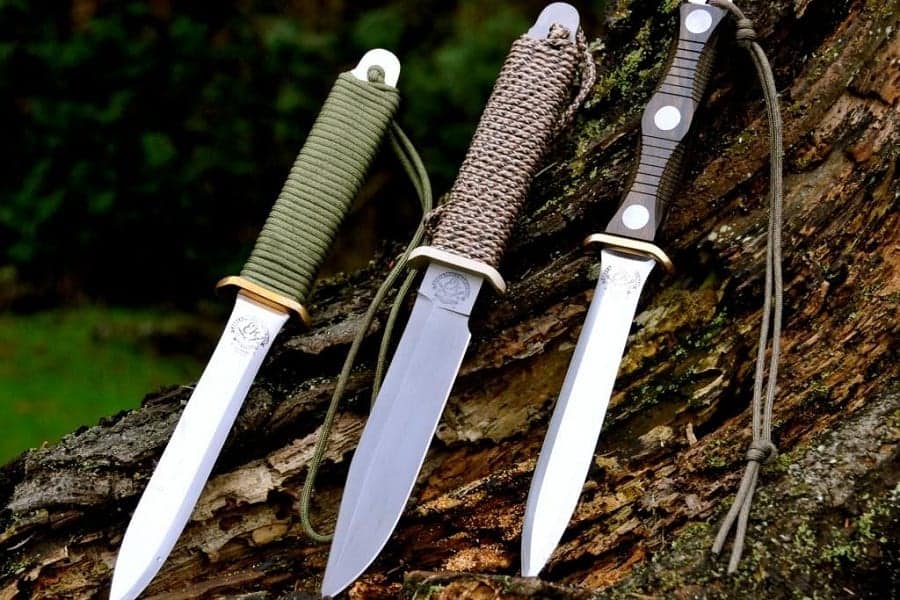 The dagger vs. knife debate has been a long-going discussion. Not only do people wonder what the difference is between them, but the other question is what tool is better?

To the everyday onlooker, daggers and knives will look very similar. Many might not even know the difference between them; if that sounds like you, keep on reading.

This guide will cover multiple aspects of the dagger vs. knife debate. We will explain what each tool is and will list the similarities and differences between the two.

We will also take it a step further and discuss what tool is better for self-defense purposes and everyday use.

If you are ready to become a knife expert, let’s dive into it.

What Is a Dagger?

A dagger is a type of knife. The main, broad definition of a dagger is a dual-edged weapon with a pointed end and sharpened sides.

There are some knives with only a single-edged blade that people refer to as daggers. However, the dual-edge is a dagger’s main characteristic and is what makes the tool so deadly.

On top of that, most daggers will have a small crossguard on the hilt. The reason for this is to prevent the hand from slipping onto the blade.

Throughout history, people have primarily used daggers as weapons due to their lethal design. In fact, experts usually classify the dagger as a close combat weapon.

One of the most famous dagger attacks involved Julias Ceasar. During a meeting, several senators stabbed him 23 times with multiple daggers.

Daggers are effective weapons for a few reasons. Since it has a sharp and pointed end, the knife can easily penetrate a victim or animal, which is why it is primarily a stabbing weapon. They are most effective if you use them with a straight, thrusting motion.

Furthermore, daggers have firm grips; manufacturers design them this way to prevent an attacker from dropping the weapon in battle.

The dagger was most popular as a weapon during the middle ages, the renaissance and early modern period, and World War I.

Finally, the dagger is not only a popular weapon. Many cultures use the iconic weapon during rituals and ceremonies due to its symbolic shape and meaning.

What Is a Knife?

Knives, on the other hand, have a less violent history than daggers do.

A knife is a tool or weapon that has one blade that is attached to a handle. Some knives will have small crossguards; others won’t. Most knives only have one single-edged blade, unlike the dagger.

The knife is a very versatile tool. People can use it for several different areas such as hunting, camping, combat, survival, and cooking, to name a few.

Even though knives can be weapons, that is not their main use. In fact, knives are less effective weapons than daggers are. People will usually use knives as weapons if they have no other options.

Unlike daggers, there are many different types of knives. For instance, you can buy a pocket knife for when you go hiking or a kitchen knife to chop some vegetables.

Finally, most knives are relatively lightweight. The tool’s weight makes it easy for people to store and take on long camping trips.

Now that we have covered the essentials, let’s get on to the dagger vs. knife debate. What are the similarities and differences?

Dagger vs. knife: even though the two tools are different, there are still a few similarities. Let’s take a look.

Which One Is Better?

This section will continue the dagger vs. knife debate. Let’s see what knife will be better for self-defense and everyday use.

There are a few factors to think of when deciding what tool is best for self-defense. For instance, how skilled are you with a knife? Where are you going to conceal the knife?

Even though daggers may be the obvious choice here, that will not be the case for everyone.

Our conclusion in the dagger vs. knife debate is that daggers will be effective for those who have had some sort of knife training.

However, we do not recommend daggers if you are a beginner at using knives.

Hopefully, you will never find yourself in a self-defense situation. If you do, you probably won’t be thinking clearly.

If you fumble with the knife at all, you could seriously injure yourself with a dagger.

Knives are well-suited for beginners and are more fool-proof than deadly daggers are.

Another factor that will shed some light on the dagger vs. knife topic is what tool is better for everyday use.

When it comes to everyday use, the knife comes out on top.

As mentioned earlier, knives are very versatile. You can find a knife for just about anything, whether it be for cutting fruit or rope.

They are also relatively easy to use. If you are a knife novice, it will also be hard to hurt yourself with a knife.

Knives are also much lighter than daggers are. If you are using the tool for everyday purposes, you will be carrying it on you. You can easily slip the knife on your belt or have a pocket knife in your jeans.

Manufacturers design daggers for one purpose; for combat. For this reason, a dagger will be a poor choice for everyday use.

Even though every dagger is a knife, not all knives are daggers.

Whenever you read of an assassination in history or even in a story, a dagger is usually the weapon of choice. Daggers are double-edged knives that are designed to kill.

On the other hand, knives have many different purposes. Even though some are for combat, the majority of knives have other uses.

Many people bring knives on hunting or hiking trips. You can also find kitchen knives in the majority of homes.

Overall, knives are the best choice for everyday use. When it comes to self-defense, daggers are effective for seasoned knife users, while knives are ideal for novices.