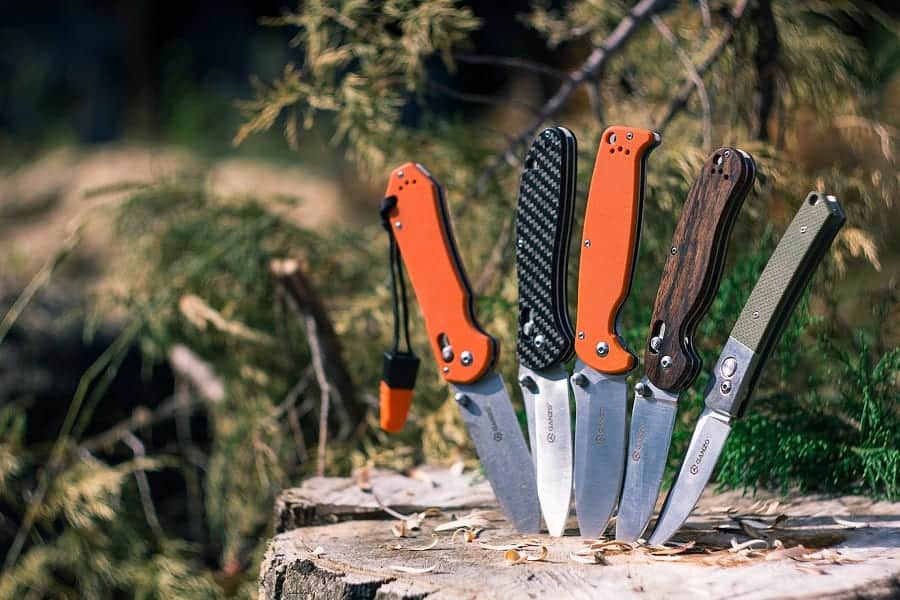 The gravity knife is one with a well-known reputation.

However, there are a few details regarding this knife that will be beneficial to know.

Whether you are interested in purchasing one or are simply intrigued by its history, this guide will cover everything you need to know about the gravity knife.

If you are in the former category (an interested buyer), there are some important things to know about the knife, such as the legalities surrounding the use of gravity knives.

Not only will we cover the question of legality, but you will learn about the different kinds of gravity knives and what you can use the tool for.

Lastly, the gravity knife has a rich history that we will dive into.

If you are interested in becoming a gravity knife expert, then keep on reading.

What Is a Gravity Knife?

A gravity knife is a knife where the blade comes out by a flick of the wrist. In other words, the knife uses gravity to release the blade, making the knife very easy to use.

The gravity knife usually has a small lever, button, or trigger that aids in releasing the blade. You simply press the button, hold the knife at an optimal angle, and let gravity do its work.

When the knife is not in use, the blade stays tucked away and safe inside the knife’s handle.

The purpose of the knife is to be able to open it with only one hand. Its small size and simple release mechanism allow owners to do so with ease.

The gravity knife does not rely on an internal spring mechanism like many other knives do; instead, it takes advantage of gravity and inertia to function.

While knives with spring mechanisms cause the blade to pop out with a good amount of force, gravity knife blades slide or fall out rather than pop out.

When the blade is not extracted, it stays safe inside of the frame in the knife’s handle. When the owner flips the knife to open it, the blade exits the frame and slides out.

There is also a lever on the knife that keeps the blade locked while it is not in use.

To close the knife, you will need to turn off the locking mechanism (which is usually a small lever) and flip the blade up towards the sky, using gravity to put the blade back.

The Different Types of Gravity Knives

There are two kinds of gravity knives: the standard gravity knife and the ‘out the front’ knife. Let’s take a look at what the difference is. 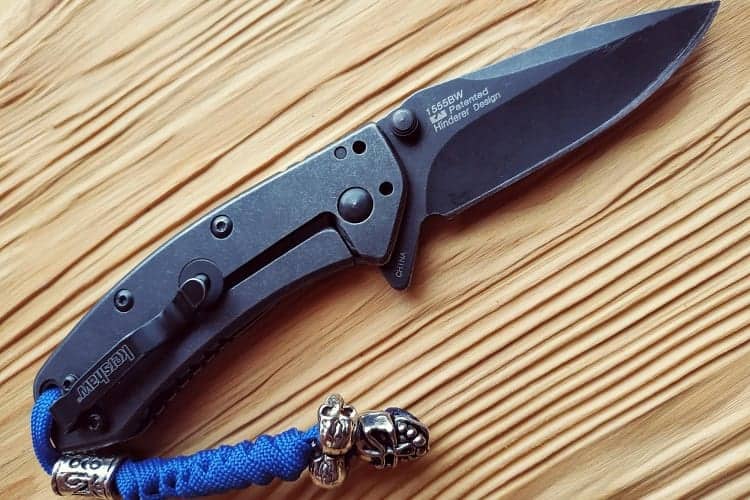 The first kind of gravity knife is the standard knife. This model has a folded blade that releases from the handle’s side instead of straight out the top.

To release a standard gravity knife blade, you simply hold the lever, flick your wrist and release the blade. When you release the lever, the blade will stay locked in place.

Out the Front Gravity Knife 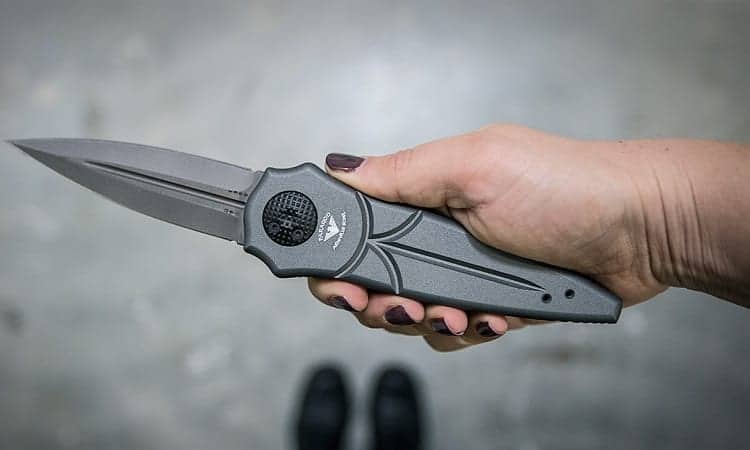 The blade on this knife releases straight from the hilt. It does not fold in any way inside of the handle.

You simply press the lever with this kind of knife, tilt the knife down, and watch the blade fall out.

When it is time to put the blade back, there will normally be a button you can press that unlocks the blade. After you press this button, you can hold the lever again and tilt the knife towards the sky, letting it fall back into the hilt.

While there will be some variation in the buttons and levers on the knives, the main mechanisms will be similar across the board. 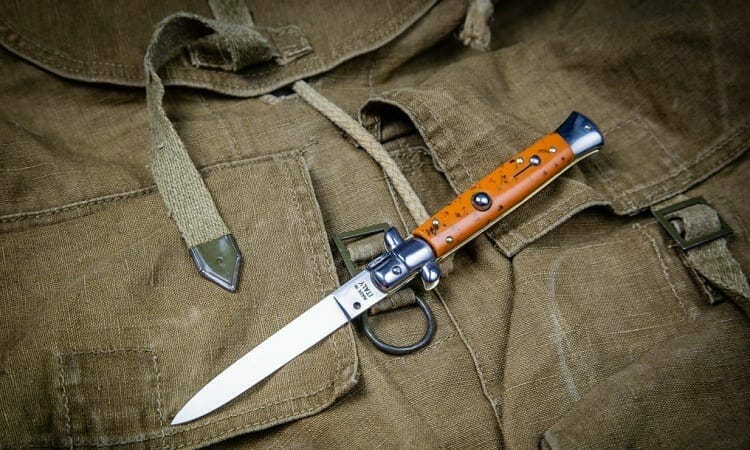 There is also another group of knives that people commonly refer to as ‘false gravity’ knives.

Any kind of weapon that can open easily by gravity, but was not intentionally designed or marketed to do so, are known as false gravity knives.

Even though these knives may have similar characteristics as the gravity knife, they do not technically have that label.

Overall, any knife that manufacturers do not design with the concepts of gravity or inertia in mind is not a gravity knife.

Now that we know how gravity knives work let’s look at the tool’s history.

Manufacturers developed the Luftwaffe gravity knife primarily for paratroops. It was a common occurrence that soldiers would become trapped in the rigging and ropes of the parachute while landing in a tree, in water, or any unnatural landing spot.

Other knives were more difficult to maneuver; soldiers normally had to use two hands with other tools. This made it quite difficult to cut themselves free.

The Luftwaffe gravity knife was heaven-sent to the soldiers since they only had to use one hand to release the blade. Therefore, it was much easier for the soldiers to free themselves if they ever got caught in the parachute lines.

Another added function to the german gravity knife was the small marlinspike attached to the hilt. Marlinspikes are long, thin tools that have a pointed (but not sharp) end to them.

The knife manufacturers altered the marlinspikes to be smaller and attached them to the hilt of the knife. The main purpose of the spikes was to untangle knots. The soldiers also used the tool to fixed jammed weapons.

Eventually, the British forces caught wind of the new knife. When they managed to get ahold of a few Luftwaffe knife models, they approached a knife manufacturer called George Ibberson & Co.

The British forces asked the knife and cutlery manufacturer to develop a knife that had a similar structure to the German model. They wanted a new knife for their special forces unit.

George Ibberson & Co. developed 500 gravity knives. The gravity knife was almost identical to the german knife; the only difference was that the Ibberson gravity knife had textured plastic or smooth wood scales on the handle.

There was a distinct difference in the way that german soldiers and British soldiers used the gravity knife.

Furthermore, agents would even use the spike (originally meant for untying tangled ropes) for stealth kills.

There are a few different uses for the gravity knife.

One of the main uses, even to this day, is for parachuters and paratroops. The gravity knife is still one of the easiest tools to maneuver and works great for sticky situations that soldiers or recreational parachuters find themselves in.

Due to their small size, gravity knives are very easy to conceal. They are also safe to store in your pocket since the blade will never release on its own.

With its simple design, the knife is also easy to use. It will not be challenging to take the knife out during a stressful and intense moment and have it ready.

The tool is also great for beginner knife-users.

Even though the knife isn’t for combat, some soldiers will still use it as a secondary weapon. With its sturdy and simple design, the gravity knife can make for a reliable, last-resort weapon.

Back in the day (we hope it stays that way), British SOE agents would use the spike on gravity knives as a weapon for clandestine kills.

Even though soldiers would rarely use the spike as a weapon, the agents found that it could do some severe damage when used right (we don’t need to go into the gruesome details).

For carpenters and dock workers

Finally, one of the most modern uses of the gravity knife today is for trades work. Many different trades will take advantage of this knife, but the most common workers to use the knife are carpenters and dock laborers.

The reason why the gravity knife is such a handy tool is not only because of the sturdy and effective blade but because of the additional marlinspike.

Since the knife is small and portable, the knife is a great tool to bring on hunting, hiking, or camping trips. You can easily store this tool in a pocket, backpack, tent, or car.

People have used the knife for decades for survival purposes, so you can be sure this knife won’t disappoint if you find yourself in a dire situation.

One of the main problems with gravity knives is legality. Police have arrested hundreds of people for carrying this kind of knife.

Currently, the gravity knife is an illegal weapon in certain countries such as Canada and the United Kingdom. There are also many states in the U.S. where gravity knives are prohibited.

The laws of each country and state will vary, of course, but many laws indicate that carrying, selling, owning, or importing a gravity knife is illegal. These laws will often apply to both concealed and unconcealed carry.

In many areas, police can charge and prosecute citizens for carrying a gravity knife or committing any acts listed above.

Furthermore, many states and countries have included butterfly knives and switchblades under the label of ‘gravity knives,’ effectively banning those knives as well.

The laws usually state that if a button, lever, or hand movement/flick of the wrist releases the blade on a knife, it is illegal.

Even though the knife is still illegal in many areas, in 2019, New York City declared that it is now legal to carry gravity knives. However, the ban is still in effect while on public transportation.

Why Is the Knife Illegal?

Even though it is difficult to know the exact reasons behind the laws, many arrests come down to the perceived intention of the knife owner.

For instance, if a tradesman, such as a dock laborer, is heading home after a full day’s work with a knife on his work belt, it won’t seem very suspicious. Why? Because the worker uses the knife for his job.

On the other hand, if somebody is hiding a knife in their pocket while going to the mall on a Friday evening, the owner’s intention will seem a bit more suspicious.

Even if the person brought the knife along for self-defense, an officer could still confiscate it if it looks as if you intended to harm someone with the weapon.

At the end of the day, before you buy a knife, it is crucial to look up your country, province, or state laws.

Many different kinds of knives are legal to carry in many parts of the world.

However, if you are traveling to a new country or are unfamiliar with some laws in your home country, becoming familiar with the rules is a good idea.

Looking up your local knife laws will help you avoid any sticky situations in the future, both on the street and in the court.

The gravity knife is one of the most well-known knives out there for its unique features.

This knife is one of the easiest and most simple tools to use. Germany invented the knife in World War 2 to help paratroops.

It was quite common for paratroops to become caught in ropes during a crash-landing. Manufacturers designed the knife so soldiers could use it with only one hand.

Some of the tool’s main and modern uses are for parachuters, tradespeople, and outdoor hunting, hiking, and camping trips.

The knife is very compact, which makes it easy for people to store the knife on them.

If you want to purchase a gravity knife for yourself, make sure to review your countries knife laws. These knives are illegal in numerous areas; the possession of a gravity knife could lead to criminal charges.