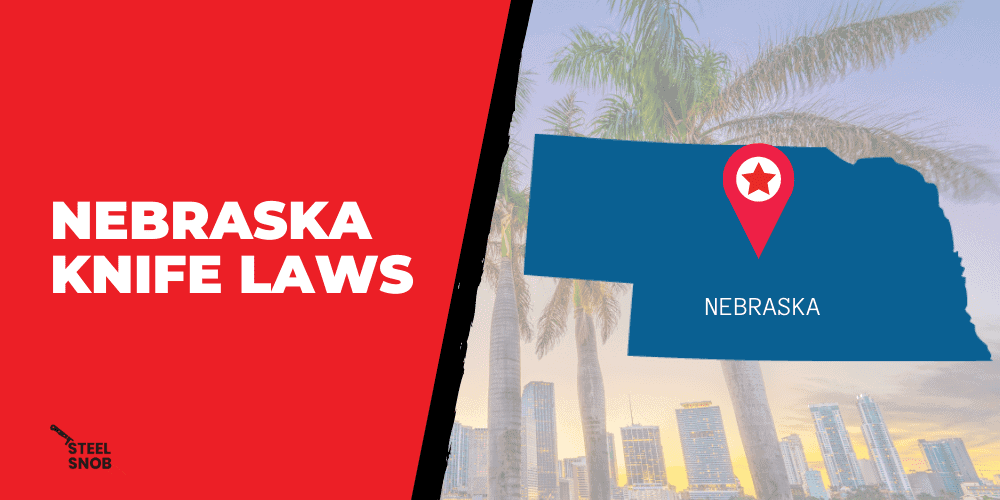 Knife laws in Nebraska are stringent and complicated. However, they can be largely broken down into two categories: open carry and concealed carry.

Open carry is the more lenient of the two restrictions because it permits an individual to have a knife on their person without concealing it for any reason. On the other hand, concealed carry does not permit this unless it is specifically permitted by statute or permitted by local ordinance under specific circumstances.

The state statute on knives in Nebraska dictates that any person who goes armed with any dangerous weapon concealed upon their person is guilty of disorderly conduct which is punishable by up to six months imprisonment or $ penalty.

There are some common knives that are prohibited in Nebraska by law, these include ballistic knives, butterfly knives, switchblade knives, stiletto knives, double-edged non-serrated folding or telescoping blade knives with a blade five inches long or longer.

The Nebraska Knife Laws are a product of the state’s knife statutes as well as, more broadly, the state’s criminal code.

How to Carry a Knife Legally in Nebraska?

Knives are a useful tool to have around the house. You can use them for a variety of tasks, from cutting vegetables to opening a package. It is always best to know the laws about what you can and cannot do with your knives. If you are carrying a knife in Nebraska, there are stricter rules about where and how it needs to be carried.

In Nebraska, it is illegal to carry knives on your person or in your car without an additional permit that only certain types of people qualify for. In general, if you have a concealed carry permit, you may legally carry knives in your vehicle or on your person as long as they are not longer than 8 inches and dangerous weapons such as axes and hatchets cannot be carried in this way either.

It is illegal to carry a knife with a blade longer than 3 inches in Nebraska.

The law is not clear about whether or not it is legal to carry a knife in your car, but the law states that it is legal to keep one for self-defense or utility purposes on your person.

What is The Knife Law for Schools & College Campuses?

The Knife Law for Schools and College Campuses is an act that was enacted in Nebraska back in 2006. It states that students below the age of 18 are prohibited from carrying weapons, including knives, on school property. And this includes college campuses as well. This law also prohibits people below 21 years of age to bring any type of knife onto school property with some exceptions.

Knives are just too dangerous to allow on school campuses, colleges, and universities. They do not belong in places where young people live, study, and work.

The Knife Law for Schools & College Campuses is clear; knives are not allowed on these campuses for safety reasons.

According to KnifeLaw.org, all knives are prohibited on school property in Nebraska unless they are used as part of curricular instruction or as an extracurricular activity sponsored by the teacher and approved by the principal.

Nebraska is a very rural state. It is not uncommon to see people carrying knives with them, and it’s quite common for people to carry firearms with them for hunting. We can conclude that the knife laws in Nebraska are largely up to interpretation. However, we should always be aware of the consequences of breaking these laws and carry knives responsibly with us in Nebraska.