11 Unusual Knives Found Around the World 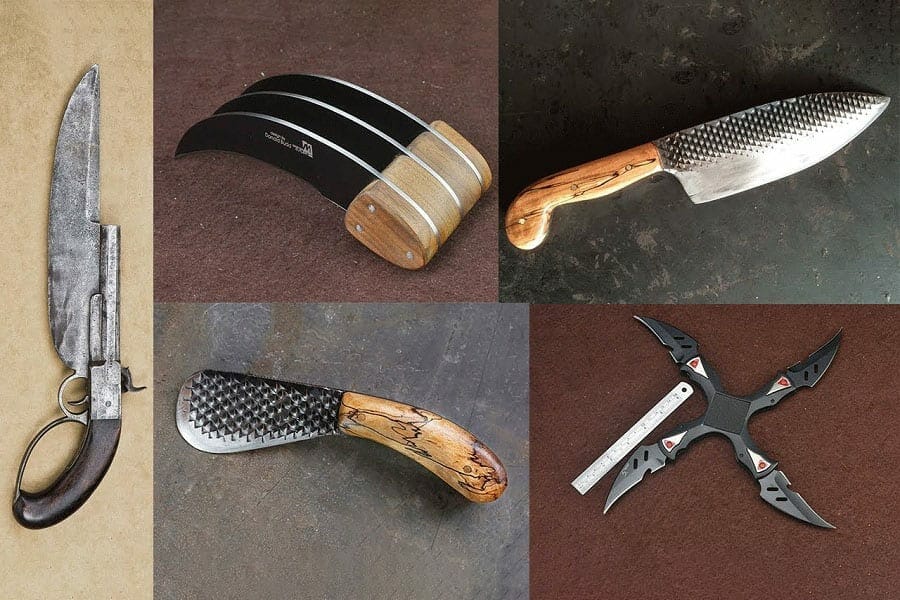 Knives are one of the oldest inventions in the world.

Many classic knives have been lost to the pages of history, there are still many iconic designs that exist around the world.

These unusual knives have a rich background and heritage, making them a crucial part of many cultures.

Many of the knives below have produced and are available in markets.

Their timeless performance has been serving hundreds of thousands of people for decades, if not centuries.

Here are some of the most unusual knives in the world today.

The Kila is a ritual dagger that was created in Ancient India, but it gained popularity in Tibet by the name of Phurba.

The dagger has designs of the three faces of Vajrakilaya, a wrathful deity in Buddhism, on the handle.

The three-blade edges of the knife symbolize the severing of aggression, greed, and ignorance.

Kilas are not used as weapons since they are considered sacred objects.

Some of them are even made from wood, which doesn’t do any harm.

However, they have always been believed to be the best weapon against supernatural entities.

Vajrakilaya was known for eliminating obstructions, which is why Kilas were mainly used to exorcise evil spirits and demons.

Balisong is a classic knife that has been recorded as far back as the 800 AD.

The knife’s origination is a topic of contention as claims have been made from the Philippines and France.

It is known for the butterfly style of the opening which allows users to flick the blade open and lock it without much effort.

They are fully-functioning knives but they are often used as display pieces.

The Kujang is definitely one of the most unusual knives from Java, Indonesia.

The sickle shape of the knife is believed to hold the balance of the world.

The knife was once used by the Javanese Kings in the region and is rumored to have been inspired by their proclamation to sovereignty by Divine Message.

The Kujang was originally used as a tool for farming.

King Kudo Lalean claimed to see the knife in a vision after which he ordered the best blacksmith to create the mystical knife.

It was never attended to be used as a weapon, but rather as a symbol for the island’s shape.

The three holes in the knife were crafted after the three main Gods in Hinduism.

After Islam became the dominant religion in Indonesia, the knife was modified by the people.

It was redesigned so that it resembled the “Syin” letter in Arabic and the three holes were changed into five for the five pillars in Islam.

The Jambiya is a traditional Arabic dagger with a steep curve and small blade.

This unusual knife is often carried as an accessory in Yemen and Saudi Arabia as well as some Muslim men in Africa.

It is seen as a symbol of manhood and social class.

It used to be known that men would prefer death over going in public without the Jambiya.

The Jambiya is usually decorative since the legends hold that the knife should only be unveiled in times of extreme conflict.

In Tihama, young boys would be presented with a new Jambiya after they were circumcised.

Many Jambiya knives were extravagantly adorned with gold and precious stones.

Islam outlaws men from wearing gold, but Yemini men consider the Jambiya as weapons, which is why they are considered an exception to the rule.

One of the most prized materials for the knife’s handle is considered the horn of the rhinoceros.

The knife is one of the reasons why the poaching of rhinos is so common.

One report in Yemen suggests that 1,500 horns are imported every year to make Jambiyas. They were used in the 60s as weapons.

Fighters would hold the knife downward and aim for the neck to puncture the artery.

Nowadays, it is commonly used in traditional events in the Middle East like dancing.

They are also used while taking oaths where two men unsheathe the knife to seal the promise.

Turkana knives are worn on the wrist and originated from Africa.

Indigenous religions in the area dictate that domestic animals like cattle are their Divine Right.

Nearby tribes of Turkana also have similar beliefs, which often leads to a cycle of border conflicts and raids for cattle.

The people of Turkana also believe in carrying out campaigns to expand territory, which why they value martial prowess over everything else.

Hence, men in the area tend to carry many weapons including finger knives, shields, spears, and Turkana wrist knives.

Turkana wrist knives are crafted from iron or steel, which were originally beaten by a rock in the right shape.

They are usually worn on the right hand by Turkana men but are also worn by all genders as well as in nearby tribes.

They are considered weapons for war but are used for a range of other tasks too.

They have been used to cut food as well as settle issues among tribe members too.

Turkana people forbid the killing of other Turkana members with spears, which is why wrist knives are often used to settle internal conflicts that result in violence.

The Germans called them the Nahkampfmesser, and they were used as a fighting knife in close-quarter fights against the British.

The US produced many such trench knives, but they weren’t used often.

The Mark I M1918 was created with a double-sided, flat blade and a bronze or brass handle.

It has the spiked knuckleduster that had grip guard, which could also be used as a weapon.

The pommel’s bottom also had a large nut that could be used to hammer in a skull.

The design of the knife allows three possible attack modes: the hammer, the blade, and the spiked grip guard.

When firearms were introduced in the 16th and 17th centuries, it was impractical to carry heavy armor.

Skilled fighters were known to use the daggers like a shield to deflect attacks.

As they became more popular, the designs grew more complex to keep up with the different combat styles.

There are many varieties for such daggers with one key similarity.

They were all designed to trap the sword of the opponent for a moment so that fighters could strike with another weapon.

Hence, many designs include elaborate guards to protect the hand carrying the parrying dagger.

The Sai is a popular part of the Japanese Martial arts, but it originated from the Ming Dynasty in China.

It was bough to Okinawa later on where it became a popular weapon.

The knife is designed for stabbing and is shaped like a stiletto. It doesn’t have a cutting edge, but rather a pointy end.

The Sai has a hexagonal or round length with a tapering at the tip.

The shape resembles the parrying daggers in Europe, but the pronged shape helps to deflect blows.

They are useful against Katanas, popular Japanese swords.

A common practice by Saijutsu is to trap the sword of the opponent within the prongs of one Sai sword and attack with the other Sai.

One time the Japanese government enforced an oppressive rule in Okinawa where weapons and metal tools needed special permission.

Until the ban was lifted, the art of Saijutsu was passed on secretly.

A campaign by the law enforcement of the time was launched to enforce the ban.

Kukri knives represent the nation of Nepal and its Gurkha regiments.

Gurkha fighters were known for using the Kukri knives during the Indian Rebellion of 1857 when they allied with the British army.

The fighting prowess of the Gurkha was renowned, creating their reputation as one of the most fearsome soldiers in the world.

They soon became part of the British army regiments.

The fighters and their knives soon became so famous that they were drawn on propaganda posters by the British to instill fear among the Argentine soldiers during the time of the Falkland conflicts.

The Kukri is 40-46 centimeters long and is a chopping weapon –similar to a machete.

They were originally a farming tool but are now used in combat as well as a utility knife.

A unique feature on the knife is the small notch at the end of the grip so that blood will not wet the handle of the knife; it prevents the knife from slipping.

The swords are used to behead animals in certain ceremonies.

They are believed to bring good luck and fortune to the entire village if the head comes off clean in one stroke.

Even today, they are worn by Gurkhas, even after retirement.

Bishnu Shrestha, one such retiree, was recorded to fight off 40 trained robbers with his Kukri.

He killed three robbers and injured either more while the rest fled.

Kris, also known as Keris, are daggers from Java, Indonesia.

They are known as spiritual objects as well as weapons, known to carry magical powers.

Ancient Kris were often forged from an astral iron obtained from a meteorite that fell near Prambanan temples nearly 200 years ago.

The wavy shape of the blade is associated with Naga, a snake-like creature in Java myth; hence, the slithering shape of the knife.

The patterns on the inside of the knife were known to act as a talisman.

Later, Kris was made with a mixture of varying kinds of steel that carried different carbon contents.

The pattern-welding design created unique appearances in the knives.

The patterns created by the blacksmiths were believed to act as a ward against bad fortune and protect the owner’s well-being.

The Misericorde knives were used by French Knights in the 14th century.

They were thin but large daggers in the shape of a stiletto.

The daggers were known to be pretty useless in fights since they didn’t have guards.

They were mainly used as a last resort for conflicts.

The name of the blade comes from a Latin word meaning ‘act of mercy’.

This is because the blade was used to end a fallen opponent’s suffering.

The Misericorde was used by French knights to deliver the last stroke for knights who were severely injured or fell of their horse.

It was intended for more of a mercy stroke rather than a heartless murder but sometimes the dagger would be used to intimidate a surrender from a wounded knight.

The victor would collect ransoms from opponents if they ended up recovering from their wounds.

There are many unusual knives that have been part of the larger culture and history of many regions in the world.

These knives are often steeped in symbolism and represent many beliefs of the larger population.

Such knives should always be studied to learn more about the society they originate from.