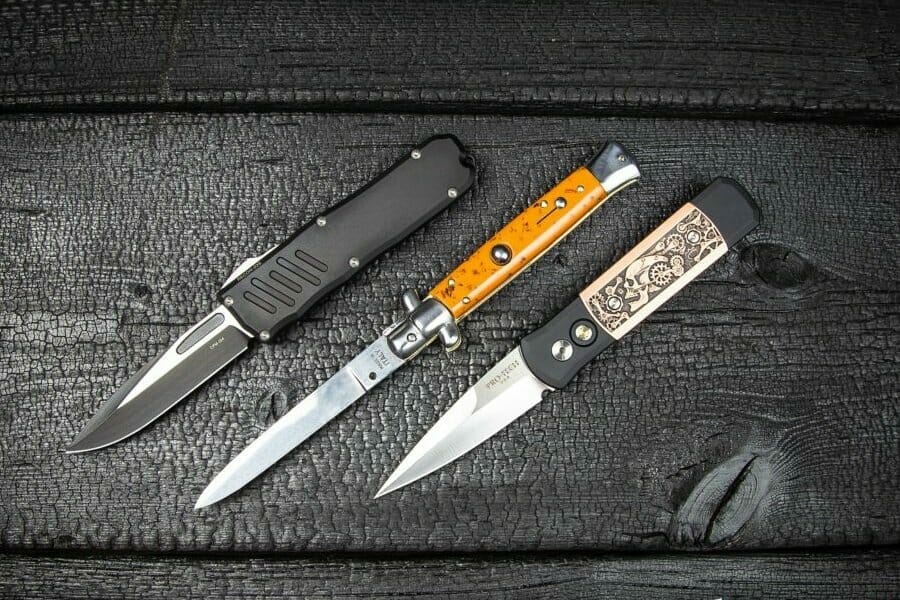 Switchblades have been around for centuries.

Since they are small and easy to use, many knife enthusiasts prefer to have a switchblade in their pocket.

Many different kinds of people use switchblades, including hunters, fishermen, woodcarvers, and anyone else who needs a compact knife.

This guide will explain what a switchblade is and will cover the history of the knife. Furthermore, we will cover how the mechanism works and give you a few tips on safely using the knife.

What Is a Switchblade?

A switchblade is a knife where a spring activates the blade.

Most switchblades have a locking mechanism when the blade extends. When the blade shoots out of the handle, it will stay there until the user presses the handle button again or manually retracts the blade.

History of a Switchblade

Before we learn how a switchblade works, let’s take a look at the history of the knife.

The earliest switchblade can be traced to the 18th century. Craftsmen in Europe developed some of the first spring-activated blades on pistols, coach guns, and bayonets. These guns had automatic folding spikes.

In 1892, a toolmaker named George Schrade designed the first practical switchblade design. He decided to put a button on the handle that activates the spring.

After perfecting the knife, he founded a knife company called the New York Press Button Knife Company. Schrade opened a factory, hired a workhouse full of staff, and started to mass-produce the knives. George Schrade’s design was very popular in the United States and dominated the majority of switchblade sales.

Over the next forty years, George Schrade would improve his design, produce a new line called the Presto series and dominate the knife market in America.

In 1940, the Geo. Schrade Knife Co. designed a new, small switchblade for the U.S. Army. The army tasked them to produce a knife for airborne troops. They didn’t want a combat knife but rather a knife that soldiers could use as a tool to cut parachute lines.

It wasn’t until the 1950s when gang violence became strongly associated with the switchblade. An author named Jack Harrison Pollack wrote a controversial article titled “The Toy That Kills.” This article discussed how dangerous switchblades are and that the fad amongst younger people led to higher instances of gang violence.

The state of New York passed a law banning the sale of switchblades in 1954. The reason behind the law was to lower the amount of gang violence.

Due to the high amount of controversy around switchblades, companies mostly designed switchblades for the U.S. Army during the late 1960s.

What Is the Mechanism Behind Switchblades?

To understand how a switchblade works, we need to understand the mechanism behind the blade.

Since there are three basic kinds of switchblades, let’s take a look at all three and see how they work.

Before we start, it is worth mentioning that even though all switchblades have very similar mechanisms, the exact mechanism may depend on the manufacturer.

Side opening switchblades are the most common. They work similarly to how traditional manual folding knives worked.

The thing that distinguishes them from traditional folding knives is that they have a spring that activates the knife.

Side opening switchblades will typically have some sort of button or mechanism that triggers the spring. When the knife user presses this button, the blade will flip up and release through the side of the handle.

Another function that side opening switchblades have is a safety mechanism. This mechanism prevents the blade from accidentally releasing and from potentially injuring the user.

There are three main springs inside of a single action OTF blade. One spring is fastened to the handle, with another attached to the blade’s base. Then there is the main spring.

When the knife is retracted inside of the handle, the main spring is under tension. The button on the handle (which controls the spring mechanism) keeps the main spring from releasing until the user presses the button. This is because the button rests on a notch in the blade.

When the knife user presses the button on the handle, a slot in the button aligns with the knife blade. This action allows the blade to release. There are pins inside of the handle that controls the arm that pushes the blade out. These pins stop the arm from moving further than necessary.

When a special notch inside the blade allows the button on the handle to return to its original position, it is locked in place.

Users must press the button again when they want to retract the blade. They will then have to manually pull the arm back to pull the blade back inside the handle.

A spring-loaded restraining pin keeps the blade locked inside of the handle by fitting into a notch on the blade.

There is also a flat plate that is the length of the blade. This plate sits right beside the blade. Two coiled springs on each end of the plate hold it in place.

To retract the blade, users can pull the slider backward. This action will allow the springs to push the notch on the base of the blade backward, which pulls the blade into the handle.

Learn How To Use It

Now that we know how a switchblade works, it is time to learn how to use it. There are a few basic tips that you should always keep in mind while using a switchblade.

Switchblades are knives in which a spring automatically releases the blade.

Typically, there is a button or a switch on the handle that controls the spring mechanism.

When using switchblades, make sure that you use your dominant hand, release the blade away from your body and make sure nobody is near you while using the knife.