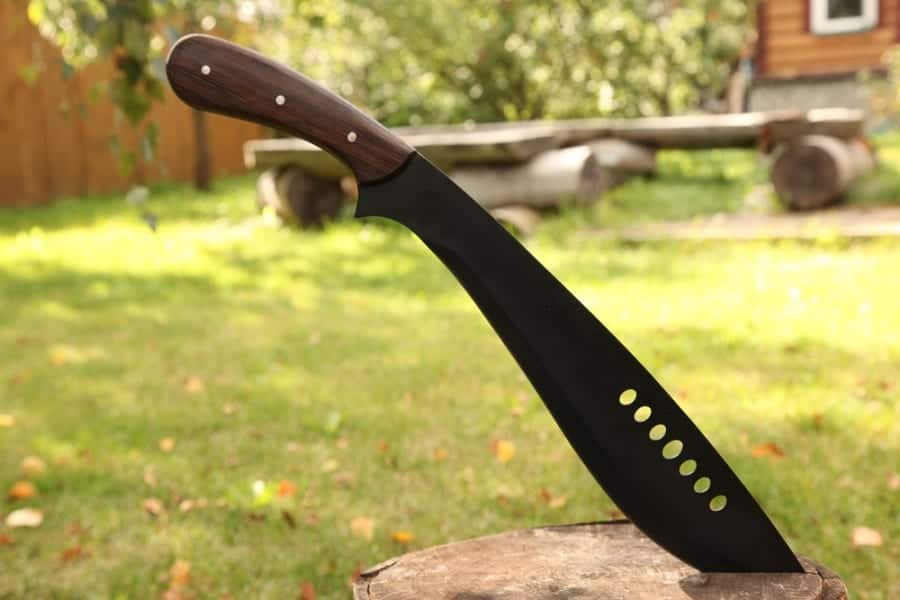 The internet always finds topics to debate on. For instance, we saw the is-hotdog-a-sandwich debate, which sparked serious discussions and fights on Reddit and elsewhere.

While this hotdog-sandwich debate remains unsolved for the most part, there are a few debates you can end using the correct arguments. The is a machete a sword debate is one of those debates we can solve.

For years, both commons and professionals have asked whether a machete is a sword. We can’t blame them for the confusion, either.

Depending on where you look at them from, a machete and sword may seem quite similar. Noticeably enough, the observation depends on how both swords and machetes have evolved in a specific cultural context.

However, thanks to the internet and the spread of knowledge, we now understand the general design behind a machete and a sword. That still has not solved the debate we mentioned about, though

In this article, we have attempted to make a head-on-head comparison between a machete and a sword.

We will compare the similarities and differences between these two items from a substantiated perspective.

As you can guess, we will start with an introduction to a machete and a sword. It might seem like a history lesson for a bit, but hold on, you’ll love where it ends.

What Is A Machete?

According to the Merriam-Webster Dictionary, a machete (noun) is a

“a large, heavy knife used for cutting sugarcane and underbrush and as a weapon.”

This particular word came from Spanish and was first used sometime around 1575. Given that the word itself came from Spanish, it’s not surprising that the term machete is linked to ideas like cutting sugarcane and underbrush, and weaponry.

We should also mention that some English varieties use the same word as a verb to refer to the action of cutting or chopping something using a machete. As we said earlier, this depends a lot on the cultural value in the first place.

In terms of design, a few ideas are revolving around a machete. As you can guess, a weapon doesn’t instantly come into being.

Thanks to inter-regional trade and cultural exchange, many designs get to places that we don’t expect them to.

For instance, history records a short-sized sword from the 13th century, referred to as the medieval falchion, which has a design similar to that of a machete.

Similarly, the ancient Greek weapon called kopis, and a Nepalese curved blade called kukri have similar designs compared to what we know as the modern-day machete.

However, if we keep the history short of the machete’s modern-day design, we can stop searching in a couple of countries in South America, Africa, and South Asia.

As you can guess, the machete image that is most popular in the United States will be from Mexico, which uses the machete for multiple needs, such as agricultural tools and a combat weapon.

What Is A Machete Used For?

Depending on the culture we refer to, a machete may have different uses.

However, if we stick to the machete’s origin concerning the modern-day image, we can draw examples from Latin America. In Mexico and other countries, a machete is used for two types of requirements.

As an Agricultural Tool

Due to its sturdy design and strong performance, a machete is an excellent choice for cutting sugarcane and a few other agricultural materials.

For instance, those who want to clear the rainforest undergrowth use the machete very often.

Because the blade has been used widely in agriculture, it has become an integral part of domestic work in many cultures.

For instance, many Latin American cultures use the machete for several tasks like opening coconuts or chopping food. The blade’s small design becomes a valuable addition for domestic needs that can be spotted across these cultures.

One of the reasons people doubt whether a machete is a sword is that they have seen the former as a weapon.

The historical analysis would tell us that machetes were a part of many uprisings worldwide.

Again, it doesn’t come as a surprise. For a society that uses a machete to earn its living, the machete was quickly an icon of identity and the most accessible weapon.

During the independence struggle of many countries and other political uprisings, the machete became the easiest option as a weapon. Even now, many societies use the machete as a side-arm, especially in the West African regions.

Of course, you should note that these cultures had modified the machete design according to the specific requirements.

Note: Although a machete can work as a weapon, it isn’t necessarily designed to be a weapon.

What Is A Sword?

According to Merriam-Webster Dictionary, a sword (noun) is a

“a weapon (such as a cutlass or rapier) with a long blade for cutting or thrusting that is often used as a symbol of honor or authority.”

Because of the impact swords have had in history and battles, the word has abstract meanings. But it is wise not to jump into that.

The etymology of the word sword takes us back to Middle English, and it was first used before the 12th century to refer to the weapon itself. As you can see, the definition connects a sword to the concepts of weaponry, cutting, honor, power, and authority.

Some alternative definitions also refer to the act of stabbing, slashing, and hacking someone.

In terms of design, however, the ideas around a sword are more homogenous. There are four parts to any sword: pommel, hilt, guard, and blade.

While the first three parts are made to protect anyone, who wields the weapon and provides them ample support, the blade is the crucial part of the weapon.

The thin and sharp blade does the job of slashing, stabbing, or hacking the opponent (in warfare, of course.) One unique aspect of the sword is that its blade will be bigger than a knife or a dagger.

Depending on the culture, again, you can find different varieties of swords. The Japanese katana and dao from China are some of the noteworthy iterations.

As for the modern-world image, though, a sword mainly represents what the English history of swordsmanship and chivalry has taught us. Of course, this is not the most inclusive approach, but it’s convenient.

What Is A Sword Used For?

As we said, a sword is a bladed melee weapon. It can attack the opponent and defend ourselves from another attack. Of course, depending on the specific needs, you can get single-edged and double-edged in history.

Because of this nature, swords were primarily used for warfare and nothing else. As we said, it was also a symbol of someone’s profession or position in society.

Currently, however, swords have become a matter of history and legacy. Due to the rise of other easy-to-use weapons, the use of blades has reduced drastically.

Indeed, some people are interested in getting their swords for specific reasons, but that’s negligible. Unlike the machete, swords have stuck to their original design and purpose.

Now that we have learned about machetes and swords, we will look at the significant differences between them.

So, is a machete a sword? It’s not. We have enough proof to show that a machete is not a sword.

Despite the little similarity that you can find between a machete and a sword, many factors keep machetes and swords apart. And the most important one is that machetes have remained a useful tool while swords are obsolete weapons.

We hope you answered your question and helped you learn a thing or two about machetes and swords.