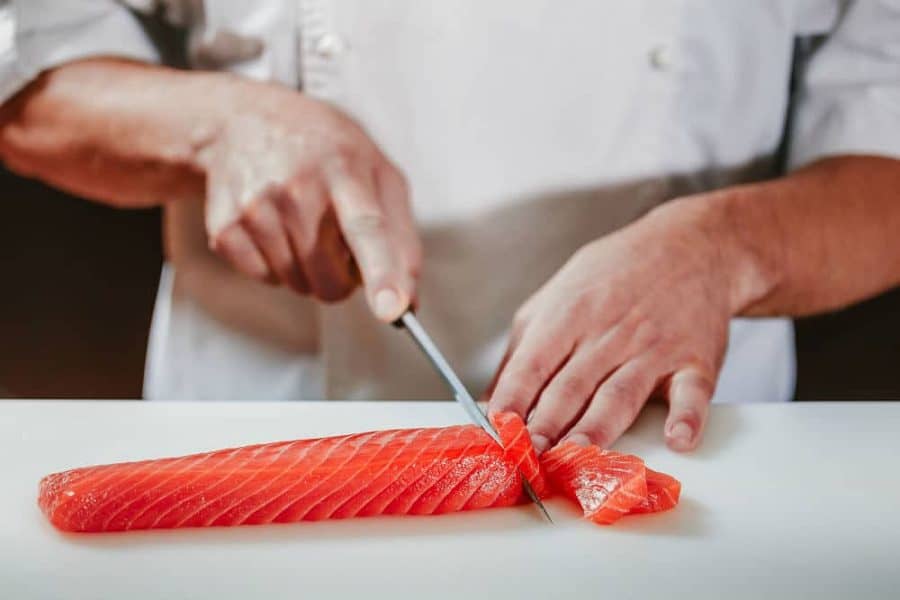 So, do you prefer sashimi over sushi and Nigiri, or do you just love all three?

Whatever your preferences in Japanese foods, you will want to know how to cut sashimi to make home dishes.

Eating out regularly can be pretty costly, but you have other options so learn how to cut sashimi at home.

Find out which seafood is best for making sashimi dishes and learn what knives deliver the finest cuts.

Once you have this information, you can practice your food passion in the comfort of your home and invite guests over once you master the sashimi cutting skill.

People often think that sushi, sashimi, and Nigiri are the same thing, but these dishes are different.

To understand the differences between these Japanese dishes, it is necessary to describe each before covering how to cut sashimi briefly.

Sushi is always served with rice. The rice is soaked in vinegar which is the keynote that creates the special sushi dish.

Vinegar gives sushi and the rice its distinctive sour flavor together with the raw fish. Contemporary sushi can include raw fish, but this is not what makes for traditional sushi.

Sushi dishes also include vegetables and cooked seafood along with other dishes. Essentially, the vinegar imbued rice is what makes a sushi dish.

Nigiri is similar to sashimi and sushi and shares characteristics of both dishes. However, Nigiri uses raw seafood, which is served with vinegar rice rolled into balls.

Because the dish focuses on rice, it does not include vegetables such as avocadoes or cucumbers, but it does come with raw fish.

In contrast to the other two dishes, sashimi is about fresh raw fish. Chefs typically use raw fish like salmon or tuna in this dish and other raw seafood.

The raw seafood comes in thin slices, which are displayed over a bed of daikon.

The primary difference between sushi, Nigiri, and sashimi is that sashimi is not served with rice.

In fact, sashimi is not regarded as sushi, but you will still need to know how to cut sashimi to make the best dishes.

Sashimi lovers often want to know which is the best fish to use in this dish.

If you enjoy your raw fish, then you can use the following types to make a delicious Japanese dish with a sauce of soy, ginger, and wasabi with leaves.

However, be discerning about the fish and the cut you use, as this impacts the dish’s flavor.

Tuna is a favorite sashimi fish, also known as Maguro. The otoro cut is the most expensive and comes from the lower belly of the tuna, which contains high-fat levels.

The pink color of the chuturo is a lower grade cut of tuna, which is also high in fat, and akami is a deeper red and is the lowest grade cut of this fish.

Katsuo is another popular tuna cut that is seared lightly on the outside, leaving the inner raw. You can learn how to cut sashimi and then serve this dish with delicious garlic and ginger.

Next, ahi tuna refers to the bigeye and yellowfin. Bigeye ahi tuna contains more fat and has a rich buttery flavor, while yellowfin has a firm texture ideal for cutting into paper-thin slices.

Yellowfin also has a more subtle flavor than bigeye.

Salmon is an immensely popular fish for sashimi for several reasons. First, salmon is delicious, and the color of the flesh is eye-catching, which makes for attractive dish presentations and plating.

In addition, Japanese sashimi menus will reflect salmon as sake.

Yellowtail is available in season during the summer months. This fish has a creamy flavor, a translucent pink hue, and is lower in fat than most other sashimi fish.

Saba is another name for this fish which is incredibly tasty when you grill it. Saba is an oily fish, but instead of grilling, many people prefer the raw, rich flavor of Japanese mackerel together with green onions and ginger.

You can use the tougher fin cut (engawa) or, the fattier section of the Halibut. Slice this cut into thin portions when you learn how to cut sashimi as an alternative to the more popular salmon or tuna dishes.

Octopus sashimi is deliciously sweet, but you must use extremely thin slices if you want to avoid the intense rubber texture of this tako dish. You can either boil octopus or serve it raw for sashimi.

Sashimi chefs cut the squid into thin slices like julienne carrots to make a sashimi dish.

Although the squid is not as tasty as the octopus, adding aromatic flavors like ginger and lime enhances the delicate taste of this sashimi dish.

First, decide on which fish you want before learning how to cut sashimi. Once you have your fish, you can select various cuts or stick to a personal favorite.

Before we get into the different cutting styles, we cover how to cut sashimi using the hira-zukuri method for home use.

Choose your favorite fish and purchase fillets to make it easier to learn how to cut sashimi. The hira-zukuri method is the simplest for preparing sashimi at home so start by buying fillets of the same size.

Choose ones that are at least four fingers wide. If you prefer to use salmon, use the upper half of the fish because it is broader.

Clean the fillet by removing any excess bloodlines or fatty deposits. Kitchen tweezers are ideal for removing small bones, which you can find by lightly brushing your fingers along the fillet.

#3 How to cut sashimi

Place the fillet on the wooden or plastic cutting board and grasp it firmly with one hand. With the other hand, slice the fillet as thinly as possible, starting from the top to the bottom.

Use one stroke to slice the fish instead of trying to saw through it as you will ruin the cut.

Hold the knife at an angle to begin cutting uniform slices in one-centimeter thicknesses. You can also cut thinner or thicker pieces according to your preference.

You can now plate the sashimi, creating your own attractive arrangement. Serve your sashimi with wasabi, soya sauce, wasabi, or anything else that speaks to your palate.

Here are the most popular sashimi cutting styles when you want to learn how to cut sashimi.

Another essential element in how to cut sashimi is what type of knife to use. Unless you have a decent knife, you won’t be able to cut your fish finely enough to see through it.

What Kind Of Knife To Use?

You can try to use a typical kitchen knife when learning how to cut sashimi, but you will probably ruin the slices unless it is sharp enough.

Therefore, Japanese sashimi chefs will frequently or even exclusively use the Yanagi or Tako sashimi knife.

The Yanagi has a narrow, long, sharp blade. The sharper and thinner the blade, the easier it is to achieve those transparent cuts.

The Tako has the same design but has a flat end for easier slicing.

Here are several sashimi knives that will make your work easier and help achieve those desirable transparent slices:

Choose one or more of these knives when finding out how to cut sashimi, and then invest in some vegetable cutting knives to improve your skills and plating.

The most common knives for cutting sushi and sashimi include:

Learning how to cut sashimi like an expert means practicing how to hold the blade’s base between your thumb and index finger to achieve transparent slices.

Also, position the knife edge below the middle finger’s knuckle to avoid cutting yourself.

Get this technique right, and you’ll quickly learn how to cut sashimi like a pro. So invest in a decent sashimi knife, select your favorite fish, and get slicing to share your passion with like-minded friends.