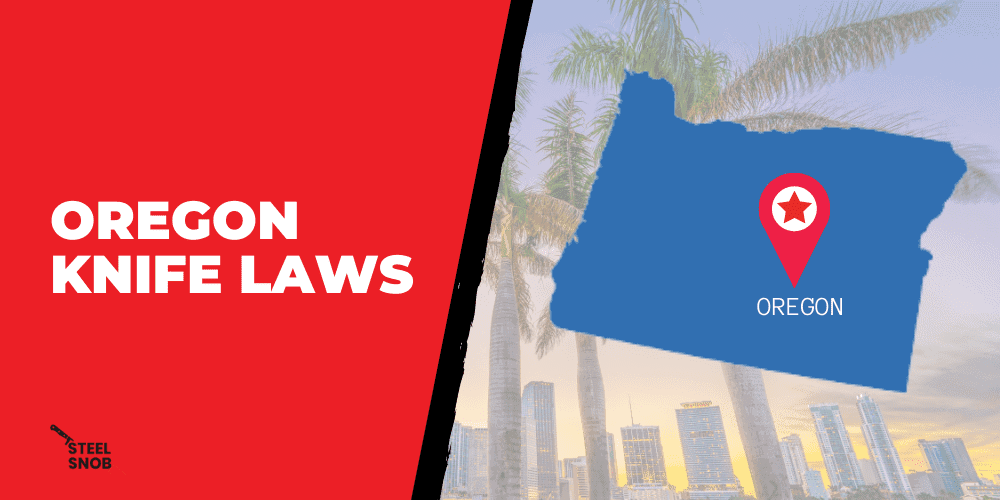 Oregon law regulates the carrying of knives. Oregon Knife Laws are vague and difficult to understand. So, it’s no surprise that people often end up breaking these laws without even knowing it. Oregon has a lot of different laws when it comes to knives – from size limitations to restrictions on certain types of blades.

Carrying a knife may be legal in Oregon only if the blade is 3 inches or less, or if it is an ordinary pocketknife.

There is a large difference between Oregon’s knife laws and neighboring Washington state. In Washington, people under the age of 18 cannot buy or carry a pocketknife with a blade that is more than 3 inches in length unless it has a folding blade and is less than 1-3/8 inches in width.

A switchblade is illegal to carry concealed in Oregon. The state has no length limit on fixed blade knives and generally does not regulate folding knives. The only restrictions on length for fixed-blade knives are in regards to hunting big game animals, where the blade must be shorter than 7 inches long and when transporting them in vehicles, which must be less than 5 inches long when fully closed.

Oregon law is clear that knives are not classified as weapons, but they may be restricted by certain provisions. Knives that do not fall under these restrictions are commonly known as switchblades or ballistic knives. These knives are illegal in Oregon.

The following is a list of the types of knives and their restrictions:

It is illegal for any individual, other than law enforcement officers, to possess or carry, whether openly or concealed, in public or on school grounds any bladed instrument which is not reasonably considered dangerous by the person carrying the instrument.

Knives are not considered deadly weapons if they can be used for cutting or slicing food. A dagger, stiletto, or other stabbing knife is considered a deadly weapon in Oregon.

The use or possession of a sword is considered to be a dangerous weapon in Oregon. This means that it can be used in the commission of any crime that may be punishable by imprisonment for life or for more than one year.

Oregon’s “dangerous weapon law,” ORS 166.240, makes it illegal to manufacture, sell, purchase, carry or possess certain types of weapons if they are capable of inflicting death or serious physical injury.

Carry your knives with confidence knowing what is legal and what isn’t in Oregon. The Oregon Knife Laws can be a little confusing for people to understand. It’s important to know what the law says and how it applies to you.